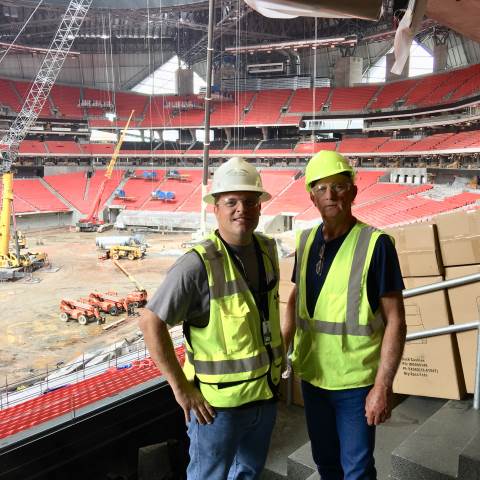 Taylor Black’s (’97) Darlington journey began in third grade. Three decades later, he is the man responsible for ensuring that all technological components of Atlanta’s new Mercedes Benz Stadium were up and running for the Falcons’ 2017 season. But even now, he says his Darlington journey isn’t over as he continues to benefit from skills mastered and connections made in school.

“In my career, I have to deal with a lot of different people and a lot of different personalities,” said Black. “I think Darlington provided a great foundation because we had people from all over the country and the world. I think I naturally evolved into being able to communicate with all kinds of folks. That was something that wasn’t even part of the curriculum; it was just part of the day-today social activity Darlington provided.”

Black’s earliest Darlington memories stem from his time in Lower School on the Thornwood campus, built in the 1830s and twice occupied by Union troops during the Civil War.

“I remember being amazed by that old white house,” he said. “We got to go up in the attic and see the notes on the wall from the Civil War soldiers. We were just little kids at the time, so young that we didn’t know if it was true or not, but it sure made for some great ghost stories.”

He played football and baseball through his senior year, finishing his football career with an undefeated regular season that ended in the second round of the playoffs. The following year, his future wife, Sheryl (Ely) Black (’01), would cheer on his former teammates to the school’s lone state football championship.

“I couldn’t have been happier for those guys when they won it all the next year,” said Black. “I would have loved for it to happen a year earlier, but I think anyone who ever wore purple and white was thrilled to see them win it all.”

Upon graduating, Black headed to Auburn University and, later, Southern Polytechnic, where he earned his degree in construction management. The math-heavy curriculum was something he embraced, having excelled in the subject in high school. He was well prepared thanks, in large part, to a legendary Algebra teacher and the support of his coaches.

“Mr. Van Es had a world-famous Algebra class,” said Black. “Everyone loved him, and he just had an ability to get the best out of his students while making it easy to understand. As far as my other classes were concerned, any of us on the baseball or football team were held to a high standard by Coach Bell and Coach Sharp. If they got wind that weren’t on point in the classroom, you could guarantee a one-way conversation that got us back on track.”

That accountability has paid huge dividends for Taylor in his work with Malory & Evans and Holder Construction Co., where he is now senior manager of MEP (mechanical, electric and plumbing), overseeing 56 employees from Atlanta to California.

Recently, the opportunity of a lifetime presented itself when Holder was made lead partner in a joint venture to complete the construction of the new Mercedes Benz Stadium. The project took four-and-a-half years, wrapping up just in time for the first preseason game of the Atlanta Falcons’ 2017 season.

Black was in charge of working with IBM on special systems, which encompasses all the key technological components that create a state-of-the-art stadium.

“We were basically in charge of installing all the technology in the stadium,” explained Black. “It was a pretty challenging project for us as we worked right up until the first event. The last six months, we were working 14-16 hours a day to get things ready, so watching the Falcons take the field was an all-time moment for me.”

Holder Construction is the No. 1 data center builder in the country. As the market for these centers has increased exponentially over the past five years and technology such as AI (Artificial Intelligence) and self-driving cars move into the mainstream, Holder has cemented itself as the go-to when it comes to projects of this nature.

“We have really just reached the tip of the iceberg,” said Black. “A few years ago, we were building data centers that were 12, 14 to maybe 20 megawatts, and now 120 megawatts is pretty standard. The growth is really exciting.”

With much to look forward to in his young career, Black looks back on his time at Darlington with pride.

“I hope current students take full advantage of their time at Darlington,” he said. “I don’t think I fully understood what was being offered to us. It was an amazing education, amazing athletics and an amazing social experience with people from all over the world. That’s a unique experience not many people get to have.”