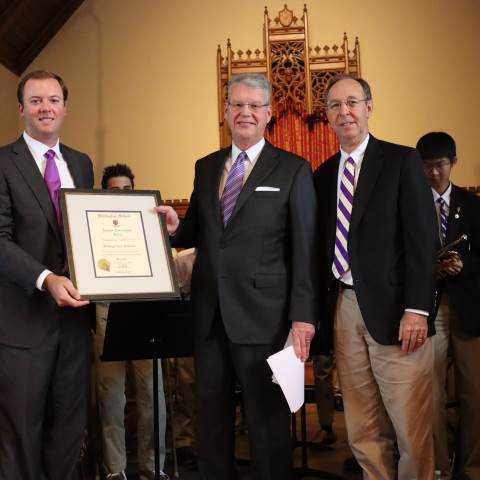 As Darlington kicks off its Alumni Weekend celebration today, the Alumni Office is pleased to announce that William G. “Bill” Smith Jr. (’72) is the recipient of the 2019 Distinguished Alumnus Award.

“From the first day as a freshman boarding student, through graduation, and for the last 47 years as an alumnus, Bill has been an exemplary leader,” said Bob Hortman (‘72), fellow classmate and chairman of the Board of Trustees. “He has freely given Darlington his time, treasure, and especially his heart. Bill may tell you that he’s a better man because of Darlington, but I say that Darlington is a better place because of Bill Smith.”

As a Darlington student, Smith earned the Faculty Medal for General Excellence. He was associate editor of the Jabberwokk and chairman of the Dance Committee; served on the Y Cabinet and the staff of The Darlingtonian; and was a member of the Darlington Players, the Pep Club, the Honor Council, and other organizations. He also played baseball, basketball and was captain of the cheerleading squad.

He is currently a member of the board of directors of Capital City Bank Group, Capital City Bank, First National Bankers Bank and Southern Company. His past service has included entities such as the Federal Reserve Bank of Atlanta, Southeast Community Hospital, the Florida Bankers Association, Memorial HealthCare, the Tallahassee Area Chamber of Commerce and others.

At Darlington, Smith is a member of the Board of Trustees, a Visitor Emeritus, and a former class agent. He has served as the honorary chairman of Leadership Darlington for the past three years and is also a member of the J.J. Darlington Society and the J. Daniel Hanks (’27) Heritage Society.

“What we learn in the classroom is really important, but I believe what we learn at school is even more important,” said Smith as he spoke to students at the Darlington Celebration, sharing words of encouragement and advice. “Lessons like civility, passion, discipline and manners. You have been blessed to attend Darlington. You are lucky. Thank your parents for the opportunity. Be passionate. Find what interests you and excel. Be civil. The world is full of folks who scream loudly and are angry but generally don’t get much done. Have fun but take what you do seriously, don’t wing it. Overprepare for every encounter, but don’t take yourself too seriously. Be humble.”

Smith and his wife, Paula, have two children, William and Jennifer, and two grandchildren, Ford and Cameron.

Click here for a photo gallery from the event.