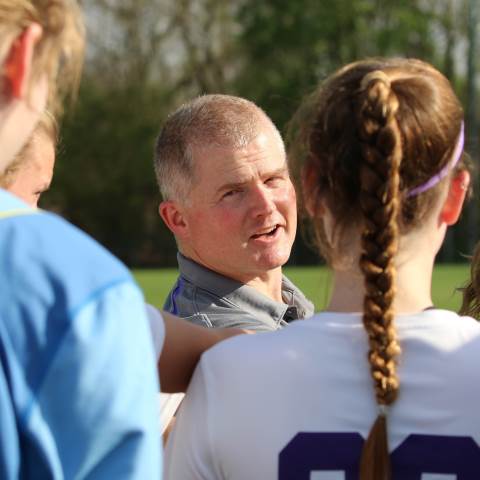 Al Shorey, head girls' soccer coach and chairman of the math department, has been named the Most Positive Girls Coach in Northwest Georgia by the Positive Athlete Georgia program.

"On behalf of all of us at Positive Athlete Georgia, we congratulate Al Shorey on being selected as a regional award winner!" said Ryan Pederson, senior director of programming. "Over 5,000 student-athletes and coaches from over 420 high schools were nominated this year, and only about 7% of those nominees were recognized as a regional winner."

"I've been blessed to coach a great group of young ladies over the past seven years," said Shorey. "We are seldom the more experienced team when we step onto the field, but you always know that our girls will compete together with a great spirit and represent Darlington well. I love watching the girls embrace the grind of the season that always comes with highs and lows. They get tired of hearing me say it but it is true that "you get better at going through tough times by going through tough times," and the typical soccer season gives us a chance to do just that. So in essence, soccer helps prepare our girls to succeed in life, and it is fun to be part of that journey."

As a regional award winner, Shorey is eligible to be considered for one of Positive Athlete Georgia's statewide awards, which will be announced in early June.