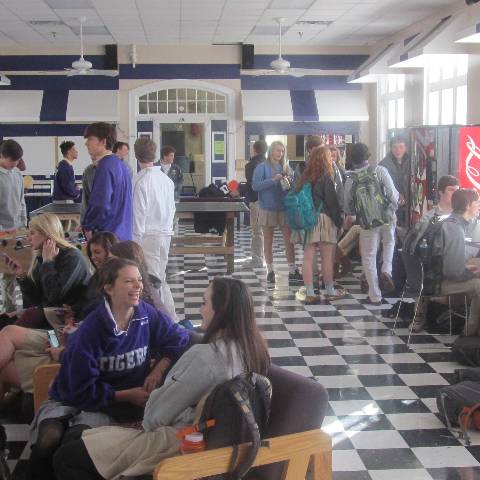 Darlington School: A Lounge by Any Other Name

A Lounge by Any Other Name

Way back, when I was in high school, we all knew the place “Where everybody knows your name.” The nation shared friends named Sam, Norm and Cliff. And, in the 1980s, "Cheers" was the No. 1 hit show on television.

Here at Darlington, we have a place like that. No, it's obviously not a traditional Boston bar, but a well-used and loved spot where students of all grades and all interests gather. And, I have come to discover that it has been that place since the 1920s.

When I first arrived on campus four years ago, this room was called The Grill. The Grill was a place where you could find alternatives to the dining room lunches. It featured the usual comfort food favorites like corn dogs, fries and warm cookies. However, the actual grill would soon close, food was no longer offered here, and yet the room in which it resided in Wilcox Hall remained The Grill for the next two years.

The student life team and myself were given the task of transforming The Grill into a true student lounge. And, with a little paint, some tables, a couple of televisions it became one. However, over the last two years it really didn’t take shape. Students didn't necessarily embrace it as a hangout spot and it seemed as though The Grill was sorely missed.

While writing this blog, I did some research into the physical space that houses this lounge. I learned that Wilcox, one of the oldest buildings on campus, was originally used for everything. It housed the only dorm, offices, faculty apartments, classrooms and the dining hall. Moving forward in Darlington’s history, many new buildings were built. And, by the 1960s, the old dining hall was turned into the student lounge, complete with couches, televisions and a pool room. Eventually by the 90s, the lounge (then known as the School Store) would also feature a grill. The pool room turned into the small kitchen snack bar that became The Grill by the time I arrived.

This year, we looked at rebranding The Grill. Gone are the days of corndogs and burgers. We wanted to create a space where the students would want to just relax with friends. So, last September The Growl was born. Today, some six months later, I am happy to report that The Growl has once again become the spot to meet. Complete with couches, televisions, foosball, pool, and the most popular ping pong, it also opens up to The Cove with outdoor seating, a fire pit and a basketball hoop. It has many uses including student coffee houses and house cookouts and holiday dinners.

My office is in The Growl, back in the former kitchen/pool room/snack bar area. It isn’t glamorous and there are still remains of the checkered history of the room, but to me it is the best seat in the house. For hours a day, I get to see students, and sometimes teachers, in their most comfortable setting. They laugh, talk, and play. They eat a pizza they ordered or celebrate a friend’s birthday. They watch anything from "Sports Center" to "Dr. Phil." They have a Coke, a bag of chips, or on special occasions doughnuts or cupcakes. And, for you "Cheers" fans, we have our Norms. There are always the regulars who seem to light up the room just by walking in.

This room has officially transformed itself into what it was always intended for. It is a welcoming gathering spot. The Growl is now more than just the big room at the end of Wilcox Hall. It is truly a place where all Tigers are welcome.