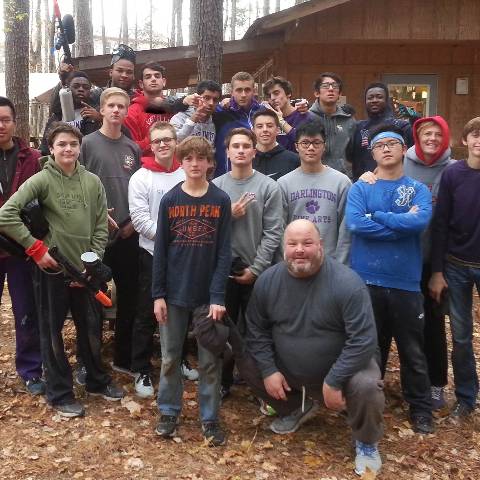 As the head of Neville House, I have been charged with the care of 31 upperclassmen. This, of course, comes with a very specific set of challenges. Day to day, night to night, I never know what unique opportunities I may face in dealing with 16- to 19-year-old young men.  On the opposite end of that spectrum, I have had another great experience that has occurred each of the last 23 summers.

At summer camp, I get to interact daily for eight weeks with 8- to 15-year-old boys. In fact, for six years I actually lived with the youngest boys on camp. And, it’s no surprise for most parents or educators to find that there isn’t much difference between the 8-year-olds of Elk Lodge and the 18-year-olds of Neville House. So lately, I have discovered that everything I need to know about boys I learned at summer camp in five simple rules.

Rule #1: When in doubt, PLAY! It is so important for boys to have real physical playtime. They love to be active, they love to compete and their brains work far better when they move. Boys have 10 to 20 times more testosterone, and far less oxytocin and serotonin than their female counterparts. Translation: boys use instinct and physicality to solve their problems. So whether at camp or school, it is important to build in playtime, sports, bowling nights, intramurals, paintball trips or just kicking a soccer ball around the hall. It is equally important to do this with them or at least join in an occasional spontaneous bout of wrestling.

Rule #2: Don’t corner them. Once again, boys are instinctive. Even at 8 years old, if you try to stare down a little boy, he will come out fighting. Well, that may be a little exaggerated, but the reality is that boys of all ages don’t like to feel trapped. One of the best pieces of advice I ever received was that when you want to have a really serious conversation with boys, you need to move. If you take a walk, play catch or even play a video game, you will find it easier to have that conversation. It is far better to talk with boys than to talk at them.

Rule #3: Don’t bore them. Boys’ brains develop slower. In fact, the space in the brain that has reasoning skills doesn’t fully develop until they reach their 20s. I had the unique experience years ago to go through training at a school I was working at when they decided to transition to single-gender classrooms in the middle school. One thing that we focused on in the boys' classes was to keep lectures to a minimum. Boys learn better when they are active and when they feel like they are helping to steer the conversation. The idea of the fewer the words the better is especially helpful when dealing with stressful situations. As an adult, I always find myself wanting to talk it out. But, if you do this when dealing with young men, it won’t be too long until you see that blank stare in their eyes. If you want a boy to do something, say it quick and be direct.

Rule #4: Traditions matter. As a parent of twin boys, I realized when they were just out of diapers that boys love uniforms, fight songs and being part of something bigger than themselves. At school and at camp, we have all of these things. Boys love to wear the colors and get that chance to be the hero. This idea comes from centuries of belonging to and protecting the group. Whether it was the Greeks, Romans, Native Americans or modern armies, men spent thousands of years as the defenders and the hunter-gatherers. This sense of tradition and pride became so engrained in a young man’s mind that it has become a natural characteristic.

Rule #5: Be Fair! This might be the most important rule of all. Men of all ages, especially young ones, do not see gray. Life in their mind is black and white. It has to be fair. If one boy gets candy, you better have enough for all of them. This is the most helpful advice when it comes to punishments. If you give a demerit to a boy for a punishment, you better be prepared to give everyone who does the same thing a demerit. One of the most challenging pieces of my job is to keep it fair while also trying to teach that life isn’t always fair.

Certainly all of these rules of mine can be debated. However, one thing that most can agree on is that boys are truly curious creatures. They think and act differently than girls; they mature a little slower; and are instinctive, fearless, and ingenious. Some people think I must be nuts to live with them 24/7/365, but the boy in me loves the challenge, excitement and opportunities I get each day.