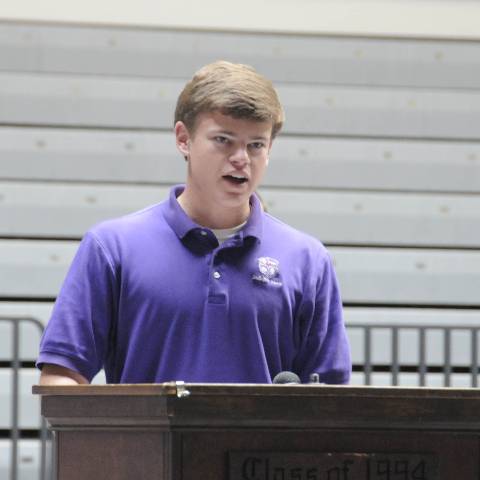 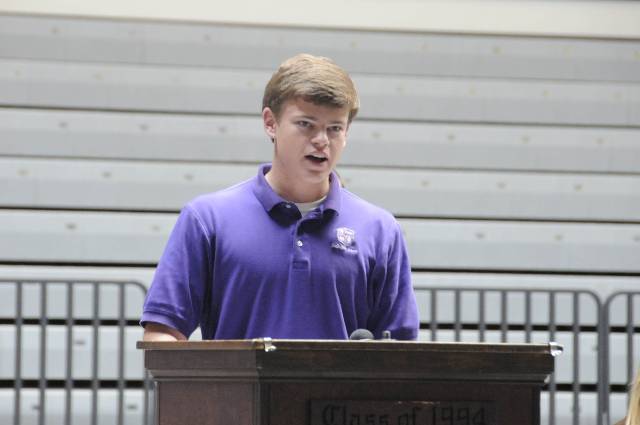 Will Crawford ('16) gives his campaign speech in April in preparation for the election of student body president. Crawford was later chosen by his peers as the first leader of the Student Council within the newly-formed Student Government Association.

Darlington's Upper School division will head in a new direction this fall with the restructuring of student leadership from the House Senate to an official Student Government Association. The plans were put into place for the 2015-16 school year by student leaders, faculty advisors and a voting student body.

The conversation began last August to take a critical look at the House Senate model to see what could be improved. After a consensus was made to move ahead and invite further discussion on the topic, the Student Life Office, the six heads of house, and House Senate president Will Crawford (‘16) decided to survey current senate members on how the system could be more effective, student-centered, and student-run.

"We are trying to make sure that students have an opportunity to be involved in the decisions that affect them,” said Crawford, who was elected to be the 2015-16 student body president earlier this month. “This change is a new way to go about [student government], and to see if we can be more successful than in the past."

The new association will similarly mirror what was in place before the House Senate began in 2001. The model emerged as a response to Darlington's House System so that prefects would have a say in student government as they represented their respective campus dormitories.

"It was very beneficial to have the House Senate because it was an easy way to get the students' points of view out in the open and dealt with," said Mamie Johnson ('17), sophomore House Senate member. "But, during some of the meetings some people wouldn't be present or involved to give opinions about certain activities."

The 29 leaders in the governing body comprised a cumbersome team of officers that many faculty, staff, and students believed could trimmed down and be more efficient.

“Every student was willing to serve, but each one joined for different reasons," said John Zazzaro, head of Neville House. "Some want to plan dances, some want to change policy, and some, like the prefects, were on the House Senate because they only wanted to serve their house."

Joined by Upper School Director Matt Peer, Dean of Student Life Brant Evans, and Dean of Residential Life and Head of Thornwood House Marcus Holmes, the ad hoc committee used the input that was gathered from the survey to rework the system into a more productive collection of student entities.

The new streamlined arrangement includes six student-led organizations under the umbrella of a new Student Government Association: Activities Committee, Discipline Committee, Honor Council, House Prefects, Student Council (the governing body), and the "Y" Cabinet. Committees within the SGA will become smaller and more defined, but also include the addition of 12 new leadership roles.

“Since the rules the student government makes will affect the students of the school, they themselves should be the people that choose the rules," said Johnson. "I think [the new system] is a lot more inclusive of the whole student body and more people can be involved."

A part of the new plan includes having more regularly scheduled class meetings, class officers and a student body president elected by the students. Depending on the committee within the SGA, some student leaders are elected and some are appointed.

The newly-formed Activities Committee will take over the planning of events like TigerFest and the Homecoming dance, allowing the Student Council division to focus more on school governance.

“These groups will be more efficient because they will consist of students who will be working within their own interests and with others who share those interests,” said Zazzaro. “It will strengthen class meetings, administration involvement, and the roles of student leaders."

"I think with this new change it will be a lot easier for students to play a part in more meaningful and substantive ways in the making of decisions in policies, events and other matters," said Crawford.

Leaders in the rising freshman class will be elected in the fall.