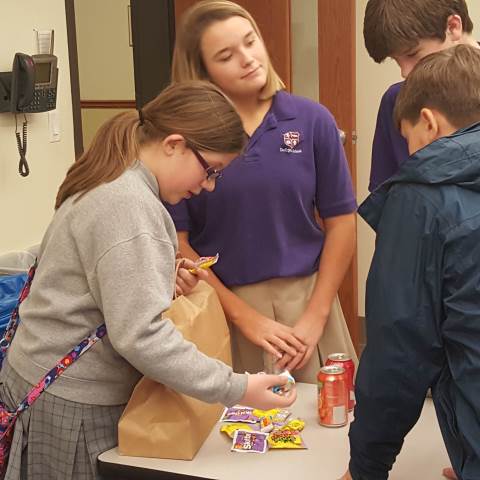 Things Get Real in the 8th Grade Trading Game

We are in the middle of a unit that teaches about how imperialism in the United States and the Western World eventually would lead to not one, but two world wars. The class studied how the United States benefited from the 1898 war with Spain, how the British Empire covered every continent, and how the European nations carved up Africa. The class analyzed why the need for resources and trading centers helped to fuel the industrial growth of the Western World. They also studied how this competition and greed also led to the near destruction of much of the world.

For our activity day, I set the class up by telling them that they needed to bring in something of value. I gave them some parameters and guidelines. I told them there were some very important rules:

1) The item and the amount of the items needed to remain a secret and only their group of three could know what it was.

2) It needed to be something they were willing to trade.

3) It needed to be something that other groups would also find valuable.

I also told them not to make this a huge deal or cause their parents massive headaches.

On the day of the activity, they came in with their “tradable commodities” all tucked away in backpacks, coolers, shoeboxes or brown paper bags. I gave them a few minutes to plan their strategy. This time was followed by two 10-minute trading sessions. I was very eager to watch and listen to the bartering and I soon discovered some very real truths about the world of economics.

In a matter of minutes, it was clear that some students liked what they brought far more than other items in the class, so they really didn’t want to trade. It was also easy to see that some items had far more value than others in the eighth-grade world. Some groups used up their resources far too fast. Some groups chose to trade in secret. And, I also found it really amazing that the person trading had absolutely nothing to do with the value of the good. Popularity, looks, humor, intelligence never played a part. An Oreo is an Oreo, and a Coke is a Coke.

I also learned that, just like in the real world, if you don’t bring anything to the table, you get left out. One group forgot to bring in goods. They tried to form an alliance and dig some stuff out of their lockers, but ultimately it wasn’t enough to be considered a really viable trading partner.

At the end of the trading sessions, I asked the groups to fill out a quick form. It asked them to identify what they started with and what they ended with. They were asked to rate their performance and to identify their best trade. I also asked them what their biggest obstacle was.

Most found some success. It was measured by diversity of products, amounts acquired and the amount of their own resources they were able to keep. The obstacles were few, but were mostly comments like, “No one wanted what I had.”

I thought it was a really fun day and a good activity. Later, colleagues asked me if I threw a party in class. I also heard that younger students were worried if the eighth grade was breaking the rules by having Coke and gum in the building. Those thoughts were funny, but I also know what they learned.

The activity showed them in a very real way the value of trading and resources. As we debriefed, I left them with an important thought to ponder. I asked them how would it feel if I allowed only the winning teams with the most stuff to have their treats. I further asked how they would feel if I allowed those same winning teams to have Cokes and Oreos every day in class.

They soon realized that this separation would lead directly to dissension. There is the lesson.