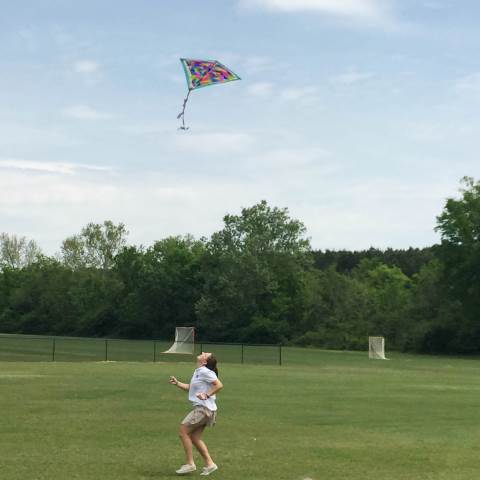 Most of my geometry students are surprised to learn that a kite is actually a type of quadrilateral, a four-sided figure such as a rectangle, rhombus or trapezoid. Kites have distinct characteristics of measure and symmetry. In previous years, I taught the construction of a kite by using a compass and straight edge to draw two isosceles triangles, one inverted on the other.

Last year during the construction activity, one student asked me, “Why can’t we make kites that actually fly?”

Good question! So this year, we started shaping a project around kite construction and ideas of the aerodynamics of flight.

Growing up many years ago in rural Tennessee, it was common in our small town to see children helping out on their parents’ or grandparents’ farms. One of the beauties of this task was to watch a child observe and participate in a project from the beginning to its end.

Kids witnessed their parents plan the activity. They heard their parents discuss the pros and cons of different approaches to the chore. They usually accompanied the parents to collect or purchase materials. Time and again the parent modeled the process of completing an entire “real-life” project, and the child would then see its usefulness and reap the rewards of the completed work.

Family dynamics have changed, so our world no longer offers children this familial learning experience as often as it used to. Youngsters still need to learn about planning, following directions, and tweaking plans for successful outcomes. Our learning-based projects can help to fill this need.

In our Honors Geometry kite activity, students were instructed on the materials and options needed to complete each group’s kite. The kite had to meet certain geometric qualifications:

1. The kite had to have exactly two pairs of congruent sides.

2. Its large diagonal had to bisect the small diagonal.

3. The diagonals had to be perpendicular.

4. The angles made by non-congruent sides had to be congruent.


We also wanted students to draw on their knowledge in other classes, but with a minimum need for research. Students were required to:

1. Investigate the contributions of William Eddy to kite flight. (History)

2. Research and learn the four forces in the aerodynamics of flight. (Physics)

4. Prove why the formula for the area of a kite is one-half the product of the diagonals. (Logic)

5. Compare and contrast the rhombus and the kite. (Writing)

6. Respond to the contribution that a tail makes to the flight of the kite as well as the role of the dihedral angle in flight. (Research)

7. Calculate the altitude of their group’s kite on flight day. (Trigonometry/Geometry/Algebra)

The students completed most of the construction, decoration and flying of the kite in a group setting, but each had to take an individual quiz at the conclusion of the activity to demonstrate mastery of the computation and research pieces of the activity. As the pinnacle of the project, we took the kites outside to fly them during an extended B week period.

Some of the kites flew; others did not. Still, as a teacher I was thrilled to listen as the students worked together to figure out how to get their kite in the air. If a kite couldn’t ascend into the sky, the students looked to the kites that were successful and tried to figure out what they could do differently to tweak their design. Some students discovered that increasing or decreasing the weight on the tail could assist its flight; some found that the arch or bow of the spar needed alteration; sometimes they needed to adjust the 90-degree angle made by the two diagonals; and some simply could not find the answer in the allotted time.

Even after flight day, I overheard discussions between students who had done further independent research to see how they could have made their kite fly higher. The students had such a good time that most did not realize that they were sharpening their reasoning skills. One class was fortunate to benefit from an interested passerby who is a founding member of a kite club. He offered several wonderful pointers and tips to the students. One class had a special treat when the Smith Smarties in pre-kindergarten joined us for some of the outdoor fun!

Just as the students learned from their kite creation experience and discovered areas of design improvement, so, too, did I learn ways in which to strengthen this project for the future. It reminded me once again of Albert Einstein’s important observation: “Once you stop learning, you start dying.”


Click here to see more photos from the project.


Click here to read a blog about the project.