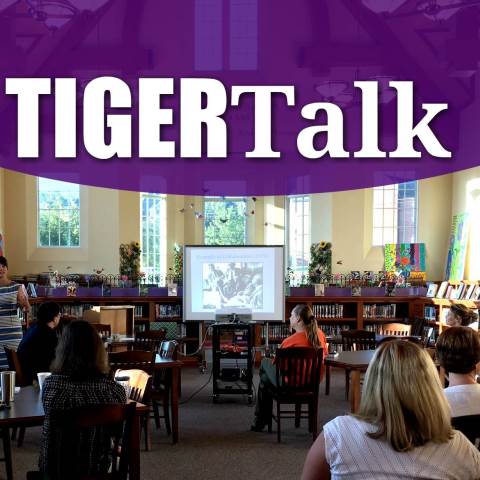 Darlington School: Tuesdays at Thatcher | TIGERTalk With a Challenge ﻿﻿

Tuesdays at Thatcher | TIGERTalk With a Challenge

This Tuesday Hope Jones, director of ELA-8, invited me to come and participate in the TIGERTalk that she was holding for parents of students in the Joanne G. Yancey Library in Thatcher Hall. Coffee was provided and therefore I was successfully lured in for what would soon become much more than a simple presentation.


We had to build things.


But before I get to that, let me get to the “why” of our construction project.


TIGERTalks are a way for parents to learn more about what the school’s overall focus is and discover ways to get involved in the process. During this year’s talks, Hope will be covering the 4 c’s of the 21st century classroom: collaboration, creativity, communication, and critical thinking.


On Tuesday we first heard about collaboration and its importance in the learning process. And then there was a test of just how great our listening skills were.


Surrounded by parents of students that spanned pre-k to eighth grade, I listened as Hope explained the difference between a classroom 100 years ago and one that you should see today.  She then transitioned to how the school’s focus on design thinking in all aspects of educating students is truly preparing them for careers that haven’t even been invented yet.


By learning how to collaborate with each other, students are learning to work effectively with diverse teams, to be flexible and compromise in order to reach a common goal and to assume a shared responsibility throughout the process and value each other’s contributions.


Heads were nodding. Parents were getting excited. I was madly making notes. And then Hope mentioned that we were going to do a team project.

There was a hush among the group, and it wasn’t because we were meeting in the library. We exchanged nervous glances. We were grouped into teams of four. I wasn’t too worried because I had a pretty amazing group of ladies already sitting with me.

We were then given the Marshmallow Challenge.

We looked over our materials. We looked at each other. And time began.


I'd like to say that our design came together flawlessly, but it was a difficult challenge. I was even too frazzled to take a good selfie of our amazing team, but here we are with our creation.

Time wasn’t on our side. Spaghetti noodles kept breaking. The tape wasn’t very sticky. The string didn’t really make much sense at first. I was resisting the urge to eat the marshmallow.

Our structure was one of two that remained standing at the end of the exercise. Our fluffy marshmallow treat was approximately three inches off the ground and the spaghetti basket held it well. The walls of the support structure that we intended as its base, not so much.

We didn’t really have any power struggles on our team as one might suspect, we just dove in and hacked out a plan together. I think we each learned something through the process. We didn’t exactly learn how to build a beautiful spaghetti tower, but we did learn how to work together.


After the exercise, Hope shared a TED talk with us by Tom Wujec which outlines some research into the “marshmallow problem.”


Collaboration isn’t about figuring out who is in charge and who is going to carry out the work. True collaboration helps you solve problems, learn more about yourself and see the bigger picture.


When children begin to collaborate, just as they do at Darlington (starting in pre-k), they are unknowingly preparing for their future.


Hope closed with this comment and her philosophy for ELA-8 and it bears repeating, “Get out of the way and let learning happen.”


Pretty amazing words to lead a school by.


Don’t miss the next three TIGERTalks scheduled for the school year: