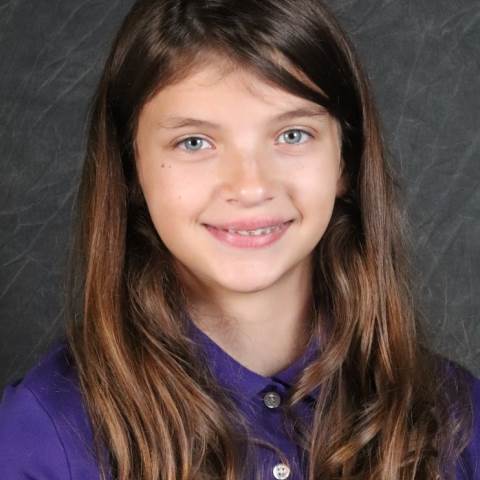 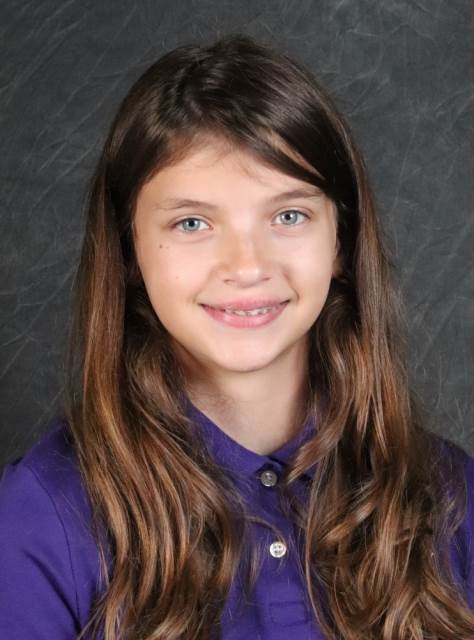 "Every year I hope to find a student whose enthusiasm for photography can help drive his or her classmates' interest," said Doug Hamil, middle grades photography instructor and head of Moser House, who introduced Robinson at the luncheon. "Alli also brought a level of creativity that inspired a higher level of work from the other students. The most impressive thing was she was able to have this influence while working all year remotely."

Robinson says she looks forward to entering high school in the fall and to pursuing her dream of writing her own screenplay. She plans to apply to Notre Dame and the University of Georgia, but says her top choice is Wesleyan University in Middletown, Connecticut.

"Most people haven’t heard of Wesleyan before but that’s the same school Lin Manuel Miranda went to," said Robinson. "But I’m not applying there just because he went there. I’m applying because I have a different connection with music ... I want to be a screenplay writer when I grow up.

"I’ve already thought about a play I want to create," she continued. "Just think of looking upon the giant screens of New York City in Times Square and seeing, 'The Phantom of The Opera Gone Wrong.' Taking a musical so loving and magical and beautiful and changing bits and pieces of it to make people laugh, seeing a new perspective of the famous opera ... That’s my dream -- to take plays and make a different meaning come from them. And even write my own. Maybe one where your favorite fictional character -- whether they’re from a book, show, or a movie -- comes to life and you have to help them get back to their side of the universe. As you both slowly fall in love with each other. It’s a wild dream, I know, but dreams really do come true. But, of course, you can’t have your dreams come true without obstacles in your way."

Robinson went on to talk about overcoming the challenges that have come along with being diagnosed with scoliosis and undergoing spinal fusion surgery at Scottish Rite Hospital. Diagnosed during a well check visit in May 2019, she never imagined her journey to wellness would involve multiple surgeries and a worldwide pandemic.

"I had a 39.5-degree thoracic curve and a 33.5-degree lumbar curve in my back," she explained. "The physician I saw at that time suggested wearing a brace, which I did for seven months. Because of my size, they felt certain the brace would stop the progression of the scoliosis. At the end of the seven months I was X-rayed again to find both the thoracic and the lumbar curves had progressed significantly, both to 50 degrees."

She was referred to a pediatric orthopedic surgeon that specialized in scoliosis surgery, and a week later he told her that surgery was not critical but urgent.

"On March 5, 2020, I had spinal fusion surgery at Scottish Rite Hospital in Atlanta during which two titanium rods and 17 screws were put into my back," said Robinson. "Dr. Schmitz only fused my thoracic curve, leaving the lumbar curve to fall back into place, as much as it would on its own."

Even after six weeks of recovery, there was an area at the incision site that would not heal. At this point, COVID-19 had hit pretty hard and Robinson began following up with her surgeon via virtual visits. When antibiotics did not work, the surgeon was convinced that a stitch was irritating the area. He scheduled a scar revision and exploratory procedure.

"On July 23, 2020, I went back to Scottish Rite for the surgery. We were told I would only have to stay overnight, which was great, as I didn’t much like hospitals at this point," said Robinson. "So surgery began and two hours later, Dr. Schmitz came out to tell my parents that I had a horrific infection in my back that was down to the bones and had completely covered all the hardware that was placed in my back four months ago. He left my back open and placed a wound vac in that would stay for three days. I would then go back into surgery to wash everything out and close me up if he felt that the infection was gone."

Robinson's surgeon told her parents that only 1% of patients get this kind of infection.

"Lucky me!" she joked in her speech. "If I get to be in the top 1%, why can’t it be in academics?! After six months of very strong antibiotics, infectious disease doctors visits, orthopedic surgeon visits, and only attending school virtually, I am FINALLY on the other side of what should have been six weeks get back to normal situation. And I praise God every single day for the strength to endure the pain, the courage to go through two additional unexpected surgeries, and for how He has grown my faith through all of it."

Alli is the daughter of Becky and Wayne Robinson of Rome.