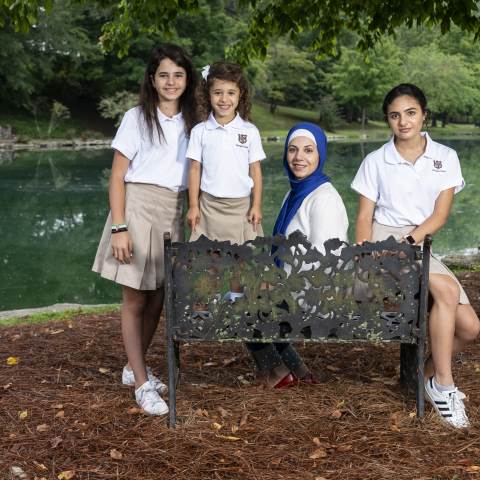 In 1988, 10-year-old Manal Khatib (’95) enrolled at Darlington as a day student after her family left Ramallah, Palestine, due to political unrest. Her father worked in the carpet industry, but instead of settling in Calhoun or Dalton, they chose Rome after learning about Darlington from industry colleague Jerry Hubbard of Marglen Industries.

Last year, things came full circle when Khatib and her husband, Ismat, moved their own family from Palestine to Rome so that their children could attend Darlington.

“On my first day, I remember Jim Van Es being there to greet me when I arrived,” said Khatib, who was in sixth grade at the time. “Coming from overseas, I didn’t know what to expect, but everyone was so welcoming. I felt at home and accepted as part of the Darlington family immediately.”

She showed promise in all of her academic endeavors, crediting teachers and advisors like Eddie Guth, Nancy Ivester, the Ortegas, Carol Mentrez, and Betsy Awsumb as mentors in her development.

“Darlington was not only a school that provided a great education,” said Khatib, “it was a place that gave me confidence, taught me how to appreciate people from diverse backgrounds, and provided me with the critical-thinking tools to face academic and career challenges in the future.”

But the classroom wasn’t the only place Khatib excelled; she was a natural on the track as well. Competing in track and cross country, she pushed herself – with guidance from her coaches – to be the best she could be, eventually setting a school record for the 800-meter relay. Her victories and losses in those events taught her to challenge herself and always strive for the best possible outcome.

In May of 1995, Khatib graduated from Darlington and traveled back to the Middle East. She would attend Hebrew University of Jerusalem and BirZeit University in the West Bank before returning to the place she felt most comfortable, Rome, to finish her degree in psychology at Shorter College.

“After I graduated from Shorter, I decided to move back to Palestine,” she said. “It was there that I met Ismat. We later married and moved to Puerto Rico, where he had spent the majority of his life.”

The couple found happiness in Puerto Rico and had three daughters, Dana, Noor, and Iman. Ismat worked in the pharmaceutical industry, while Manal focused her attention on their children until they returned to Palestine in 2009. Their time in Palestine allowed them to travel throughout the Middle East and Europe, giving their daughters the opportunity to experience different parts of the world and develop an appreciation for different cultures.

Life was good, but the couple wanted the best possible education for their children and Manal’s experience at Darlington left no doubt where they could receive it.

“After 18 years away from Rome, we made a decision to move back to the States so that we could enroll our children at Darlington,” she said. “Our sole motivation for coming back was to make sure our girls were provided the best education possible. I knew from my time there that they would have an amazing experience at the school.”

So, in 2017, they made their move back to Rome and the school that fostered so many good memories for Manal. Dana, Noor, and Iman all enrolled at Darlington, and a second generation of Tigers was born.

“It has been a wonderful transition,” said Manal. “Every faculty member that has been involved with my kids since arriving at school has made it feel like home for them in such a short time. They are in school with children from all over the world, and I love that they are able to connect with people from various cultural backgrounds. Each one of my girls is just so happy to be at Darlington, and I’m happy to call this place my alma mater. I’m sure Dana, Noor and Iman will be as proud as I am when they can call it theirs.”