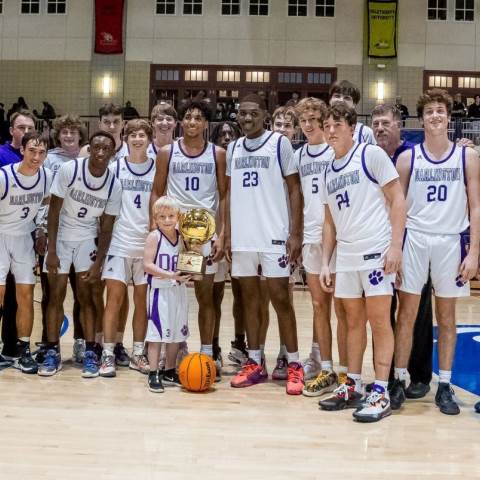 This article, written by Alex Farrer, was originally published in the Dec. 19 Rome News-Tribune:

It’s not always going to be pretty, but good teams have to find a way to win sometimes no matter what method they have to use. On Saturday night in the Rome Seven Hills Rotary Christmas Tournament Championship Game, that method for Darlington was tough defense and a standout performance from senior Patrick Shelley.

The Tigers got a game-high 24 points from Shelley and grinded on the defensive end to pull off a 46-40 win over Model to claim the program’s first Gold Ball Trophy since the second of back-to-back titles in 2006 at the tradition-rich event.

Neither team had their best offensive night in Saturday’s hard-fought contest, but the opposing defenses had a lot to do with that. After the game was tied at 14-14 following the first quarter, Shelley put Darlington’s offense on his back, scoring all 12 of the team’s second-quarter points, including a 7-0 run to start the period, to lead the way to a 26-18 halftime lead for the Tigers (7-0).

Darlington maintained the lead in the third quarter as they led 41-32 at the end of the period following a 9-4 run after Model had cut it to four at 32-28 midway through the period.

Shelley then opened the fourth quarter with an emphatic dunk plus a foul and calmly knocked down the free throw to put his team up by double digits at 44-32. Model (5-2) scratched and clawed down the stretch to try to get back in it, but the closest they could manage to get to the Tigers was the final margin of six points.

“One of the things we have talked a lot about this year is we want to be resilient...we want to show toughness,” said Darlington head coach Nathan West. “One of our mottos this year is ‘get your hands dirty.’ We didn’t shoot the ball extremely well tonight, but I was proud of how our guys grinded it out and got it done on the defensive end. Hats off to Model too. They do a great job of making it tough on you with their defense also.”

Shelley scored 16 of his game-high 24 points in the first half but added five in the third quarter, including a clutch 3 as time dwindled down in the period to push Darlington’s advantage back to nine at 41-38. He then added his final points on the powerful dunk, And-1 to open the fourth.

“That was a crazy play,” said Shelley of the exciting dunk. “It was right in front of a lot of the Model fans that had been loud for a lot of the game. It definitely was a cool play to be a part of. I’m just glad I was able to make a big play for my team. We had to go through some adversity tonight, but we played well on defense and made some tough shots.”

“With Patrick, he doesn’t really force anything,” added West of his senior standout. “He plays within our offense and does whatever we need him to do. I think he knew going into this one that it was his last Christmas Tournament game, and he wanted to go out with a bang. He played great tonight. He’s an excellent kid, and I’m sure glad he’s on our side.”

Also scoring in double figures was D’Marion Floyd who had 10 points for Darlington. DJ Johnson contributed nine as well.

Model had a pair of double-digit scorers with Dane Fisher leading the charge with 12 points as he came back to play a big role in keeping his team in the championship game with nine in the second half following an ankle injury in Friday’s semifinal win over Rome. Jakeness Heard added 10 points for the Devils, and Cole Mathis and Jeremias Heard each scored six.

West said it was great to see his team perform on the big stage to claim the Gold Ball after falling in the championship game to Chattooga last year.

“I’m proud of how our guys played in a tournament championship game,” said West. “To lose in the finals last year and come back and finish it off with a win this year was really good to see. There is a lot of history in this tournament. I know a lot of people who have told me about it and given me words of encouragement since I started here a few years ago. It’s very important for the Darlington community. Our guys knew that it’s about more than just them...it’s about everyone at Darlington and everyone who supports them.”

“This win gives us a lot of confidence going into the rest of the schedule,” said Shelley. “Ever since we lost in the (Christmas Tournament) championship last year, it’s really been on our hearts and minds to come back and win it this year. We did it so now it’s time to go accomplish more goals this season.” 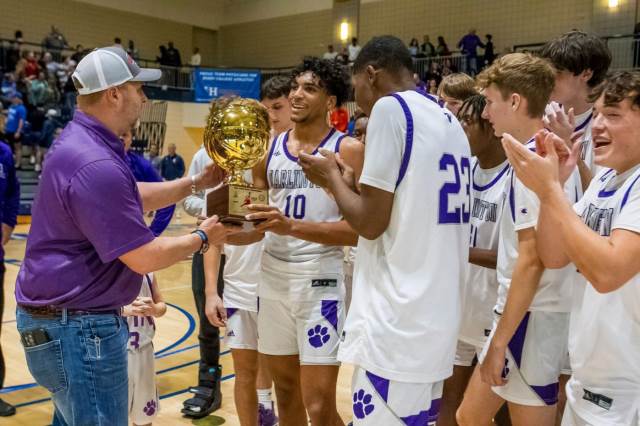