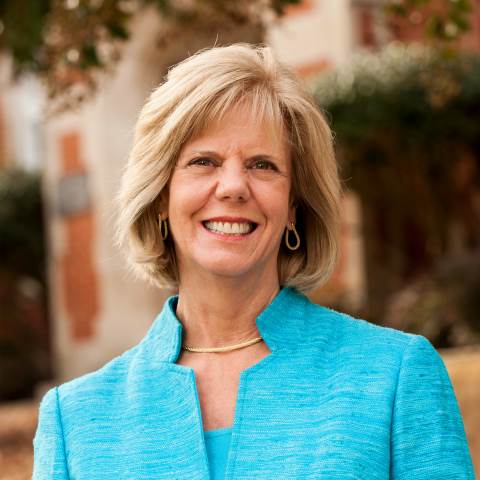 Upon first meeting Villa (Sulzbacher) Hizer (’66T, LD ’12), you might not peg her as a risk-taker. A successful businesswoman and community leader with a heart for serving others, she is the epitome of southern charm.

But the truth is, Hizer sees great value in taking risks, both personally and professionally. That’s one of the reasons she ventured to the Bonneville Salt Flats in August to race her late husband, Courtney’s, 1987 Buick LeSabre.

“Building the car from scratch with help of his friends, on his first try, [Courtney] … became a member of the 200 MPH Club and went on to break six more records,” she said. “So this year … after being trained with some IndyCar drivers, I drove the race car on the Salt Flats at 156 miles per hour, and next year I will go for the 200 MPH Club. You’re never too old to go after what you want. It was thrilling.”

Hizer’s journey of self-discovery began at Thornwood School, where she quickly learned the importance of trying new things. There, she was active in sports, Chorus and Drama Club, in addition to serving as a photographer for the Little Women yearbook.

“Our Class of 1966 was the largest, the brightest and the wildest, so our schoolmates told us,” she laughed. “I cherish the bonds I formed … Even to this day, we feel a sisterhood and still reminisce about being on the blue or grey team, our favorite or least favorite teachers, and special traditions like dancing around the maypole. These friendships are real … Life’s lessons shared with friends give you strength.”

While the list of teachers who inspired Hizer is a long one, it is Mr. Humphrey who made, perhaps, the greatest impact.

“Mrs. Spurling would spend time telling us what college life would be like. Mrs. Candler prepared us for science, even though our rocket launch was a dud. Our P.E. teachers, Mrs. Doss and Mrs. Sisley, on rainy days tried their best to guide us to be proper young ladies, teaching us manners,” recalled Hizer. “Mr. Humphrey, though, was my [greatest] influence. He praised the term paper that I’d written and told me how impressed he was. At that point, I realized it was worth the time to study and to work hard, not just coast along. He motivated me and gave me confidence.”

After high school, Hizer attended Converse College before graduating from the University of Georgia with a degree in mathematics. She began her career working for a CPA firm and, later, engineering and computer companies in Atlanta. While there, she also completed graduate work at Georgia Tech.

In 1976, she and Courtney moved to Rome to run North Georgia Distributing Co., which they would do for the next 28 years.

“A classmate from UGA offered us this opportunity in my hometown, and it was a big risk,” Hizer said. “We knew nothing about operating a company … and we learned quickly, many times by observing what not to do.”

The couple led the business through a period of rapid growth, winning the coveted Miller Masters Award for outstanding sales and service numerous times.

With her return to Rome, Hizer made it a priority to continue her family’s long legacy of service to the community – something that remains near and dear to her heart to this day.

“Your knowledge, compassion and kindness are gifts you can always afford to give,” she said.

Active in industry and civic organizations, Hizer served on the Georgia Beer Wholesalers Board of Directors for many years and, along with a group of Romans, founded First Rome Bank, now Regions Bank. She has served on the Boys & Girls Club Board of Directors for 33 years, receiving many awards including the Distinguished Service Award, and has been involved with Chieftains Museum for 38 years, serving as treasurer and president.

She has also been involved in Junior Service League (receiving Sustainer of the Year in 1997), the Greater Rome Chamber of Commerce and Leadership Rome, Women in Management, Regions Bank, American Cancer Society, Summit Quest, Heart of the Community, Rome Area Heritage Foundation, University of Georgia Libraries Board of Visitors, and the Berry College Senior Scholars Advisory Committee.

An active member of the Darlington Community, Hizer is a graduate of Leadership Darlington and a member of the Alumni Council as well as the J.J. Darlington Society and the J. Daniel Hanks (’27) Heritage Society. She also served on the Second Century Campaign’s Thornwood Cabinet and has volunteered with the Annual Fund.

Upon accepting one of Darlington’s 2016 Distinguished Alumnus Awards in October, Hizer encouraged students to take risks as she has throughout her life.

“Challenge yourselves. Stretch outside your comfort zone. Try new things,” she said. “Darlington gives you opportunities to make the most of your life. Take it, embrace it, find your passion, believe in yourself, treasure your friends and you, too, will be forever grateful.”