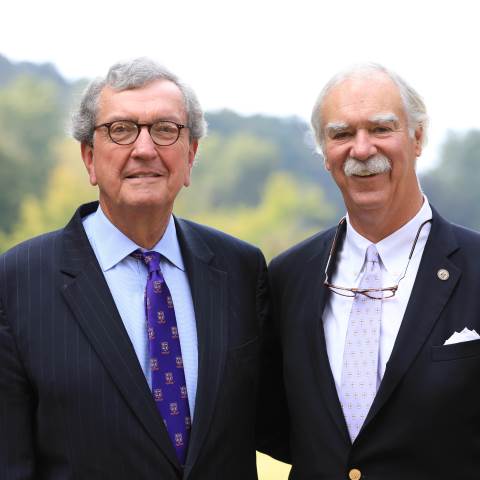 Lee Thuston (’67) and Larry Williams’ (’67) friendship runs deeper than the waters on which they fish together each year. The lifelong friends – who were basketball teammates in high school and eventual roommates at the University of Virginia – credit their boarding experience at Darlington with preparing them well for their futures.

“Every year, Larry and I go fishing on Memorial Day weekend,” he said. “We sit in boat and we talk about our families, our businesses, what we’ve done right, wrong, successes we’ve had and mistakes we’ve made. This past year, the conversation was a little bit different and more retrospective…

“We were sitting there talking and one of us said, ‘You know, it all began at Darlington,’” he continued. “So then we start talking back and forth. Larry says, ‘Think about it, Thuston, we learned how to work hard, discipline, how to study hard.’ I say, ‘We learned people skills, leadership skills, friendship skills.’ Larry says, ‘We learned to express ourselves verbally, in writing.’ I say, ‘We learned morals, honesty, integrity, keeping your word.’ So, we keep going back and forth about all the preparation we received here, and it was an interesting conversation.”

As Darlington kicked off Alumni Weekend in October, Thuston was named the recipient of the 2017 Distinguished Alumnus Award.

“This is a real honor for my family … It is even more of an honor because I can look out in this audience and see several faces that I think are more deserving than me to get this award,” he said humbly during the ceremony.

Thuston enrolled at Darlington in August of 1964 and, in his three years as a Tiger, became involved in many aspects of campus life. He joined the Pep Club, The Darlington Players, the basketball team and became affectionately known as “Stretch” to his classmates. He was also elected president of his senior class.

“I was two weeks away from following my older brother to boarding school in Tennessee when my father told me he had sent one of his salesmen to pick up an admission test from Darlington School in Rome, Ga.,” said Thuston. “I took the test and a couple of days later, he and my mother called me into the library in our home. They said, ‘You’re not going to Tennessee; you’re going to Darlington.’ Ten days later, I arrived. I’d never been here before, never seen it. They didn’t have a dorm room for me because I was too late getting in, so I had a small, single teachers’ apartment on the third floor of South Hall. I was happy here. I had a good time.”

After Darlington, the alumnus went on to earn his B.A. from the University of Virginia and his J.D. from Samford University’s Cumberland School of Law before serving as a law clerk for Honorable Justice Richard L. Jones on the Alabama Supreme Court. Following his clerkship, he received his LL.M in Taxation from New York University.

Today, Thuston is an attorney and current chairman of Burr & Forman in Birmingham, Ala. As chairman, he oversees the Burr and Forman’s Executive Committee as well as strategic initiatives, business development, and client service programs. Previously, he had served as firm managing partner since 2005. He practices in the corporate/tax practice group, focusing on economic development, business and succession planning, trusts and estates, tax law, and international law.

Thuston is a driving force behind Alabama’s economic development and has played a large role in some of the state’s major manufacturing deals. For this work, he was named one of the state’s Most Influential Executives by Birmingham Business Journal. In addition to working with state government and the departments of commerce, local government, and developers, he is actively involved with the Birmingham Business Alliance, the Alabama Automotive Manufacturers Association, the University of Alabama Comprehensive Cancer Center, and the Alabama Wildlife Federation.

A proud alumnus of Darlington, Thuston is a former trustee and Board of Visitors Emeriti. He also served as chairman of the Birmingham-area Design for Darlington Campaign. He and his wife, Gray, have two grown children, Will (’00, LD ’12) and Thames.

“Lee Thuston is a graduate who exemplifies the school’s motto: Wisdom more than Knowledge; Service beyond Self; Honor above Everything,” said Linda (Grizzard) Owens (’79), chair of Darlington’s Board of Trustees. “He has had a very distinguished career in law and made a huge impact in his home state of Alabama. Throughout his life, he has shown his love for the school and others by illustrating compassion, staying connected, and confidently leading by example. He truly seeks to improve the greater good.”