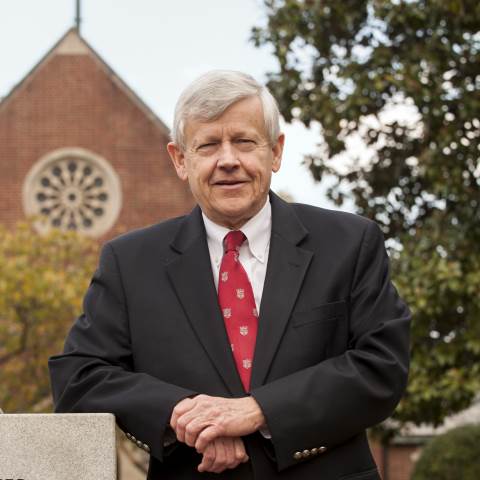 Dr. Dan Hanks (’61, LD ’12) and his family have had a nearly-90-year relationship with Darlington School, and he’ll tell you himself that he is better for it.

“In my days on this campus, the teachers wanted us to succeed but as we used to say, they did not ‘cut the students any slack,’” he recalled. “They taught us the lifetime values that success, or academics, or any other endeavor in life usually occurs after both hard work and good preparation. They espoused the philosophy of ‘tough love’ long before that term was ever popularized ... At least for me, the Darlington education was well worth the time, the effort and the money expended by both my parents and me for my years on the Darlington campus.”

His father, the late J. Daniel Hanks Sr. (’27), was the school’s first director of development. The elder Hanks, who went on to be named Distinguished Alumnus and life trustee, authored the book “The Story of Darlington School: The First 80 Years” in 1991. Today, he is the namesake of the school’s J. Daniel Hanks (’27) Heritage Society for planned giving as well as the Hanks Archives, along with his wife.

Dan Hanks is one of three sons of J. Daniel and Dorothy Hanks. As a day student at Darlington, Dan played soccer and was a member of both the Darlingtonian and Jabberwokk staffs. After graduating, he went on to attend Davidson.

“There is no doubt in my mind that we Darlington graduates who went on to attend Davidson College that year, and there were several of us, were well positioned at the beginning of our college academic careers,” he said. “We were able to compete well with students from other prep schools and good public high schools. I also believe that many of my fellow Class of ’61 Darlington graduates had similar experiences where they attended other colleges.”

After receiving his B.S. from Davidson, Hanks earned his M.D. from the Medical College of Georgia, where he was a member of Alpha Omega Alpha Honor Medical Society. He completed his residency at Medical College of Virginia at Richmond and the University of Alabama at Birmingham. He then served as a major in the U.S. Army Medical Corps before returning to the Medical College of Georgia as a Fellow in Diagnostic Radiology and Neuroradiology and, later, assistant professor. He spent one year as chief of radiology service at Veterans Administration Hospital in Augusta, Ga., before moving to Rome to join Rome Radiology Group.

“This award from Darlington School … is indeed a major post-retirement event for me,” Hanks said upon receiving a 2016 Distinguished Alumnus Award in October. “I thank the Alumni Association for this award and I wish to thank all the students for listening. I hope that when you students are my age and you are looking back on your own lives, that you will discover, as I have, how much your years at Darlington will have prepared you for success in your own futures.”

Hanks’ other awards and honors include several Georgia Senate and House Resolutions as well as the 2014 Distinguished Alumnus Award from the Medical College of Georgia Alumni Association and the 2016 Georgia Radiological Society Gold Medal. The Georgia Radiological Society, of which Hanks is a past president, also established the J. Daniel Hanks Jr. Fellowship in Governmental and Regulatory Affairs in his honor in 2013.
Locally, Hanks is a graduate of the Greater Rome Chamber of Commerce’s Leadership Rome program and past president of the Leadership Rome Alumni Association; past member of the Heart of the Community Board of Governors; past vice chairman of the Rome/Floyd Cancer Initiative Board of Directors; past Board member for the Northwest Georgia Cancer Initiative, Floyd College Foundation, Rome Area History Museum, and Citizens First Bank of Rome; past president of the Georgia Bulldog Club of Rome; and past chairman of the Floyd County Republican Party.

At Darlington, Hanks is a graduate of Leadership Darlington and a member of the J.J. Darlington Society and the J. Daniel Hanks (’27) Heritage Society. He is a past member of the Board of Visitors, the Planned Gifts Committee and the Centennial Celebration Committee. He and his wife, the former Adeline Wright (’62T, LD ’12), have a grown son, Daniel (’99).

“Darlington graduates have been successful in many different vocations and in many different geographic locations,” said Hanks. “This institution has a history of giving students good foundations for future success in many areas of life if those students are conscientious about academic achievement ...

“The culture of the institution also emphasizes the importance of lifelong values that are stated in the school motto, ‘Wisdom more than Knowledge, Service beyond Self, Honor above Everything,’” he continued. “For in the great scheme of things, what is the true value of academic achievement if it is not used appropriately for the greater good of those people in your community and your profession?”